In 2012-2013, Fort Collins Colorado experienced a series of extreme events - extreme drought, fire, heat, and flooding that broke historic record after record. The city was ready for some of these events, but not all of them, and not in such quick succession. Luckily, city leaders are taking climate change seriously. They are looking at the model projections and coming up with win-win solutions that not only reduce the risk, but also improve peoples’ daily lives. These strategies build resilience across all parts of the community as conditions continue to become more extreme and less predictable.

As one of the regions experiencing severe impacts in terms of coastal flooding, permafrost melt, and shifts in species needed for subsistence lifestyles, Alaska is on the front lines of climate change.  It is because of these intense impacts that Alaska is a high priority region for our ClimateWise team. Dr. Marni Koopman and I attended the Alaska Forum on the Environment and moderated a panel titled: “Climate Change Adaptation: Linking Alaskan Communities with Resources to Help Meet Challenges.” 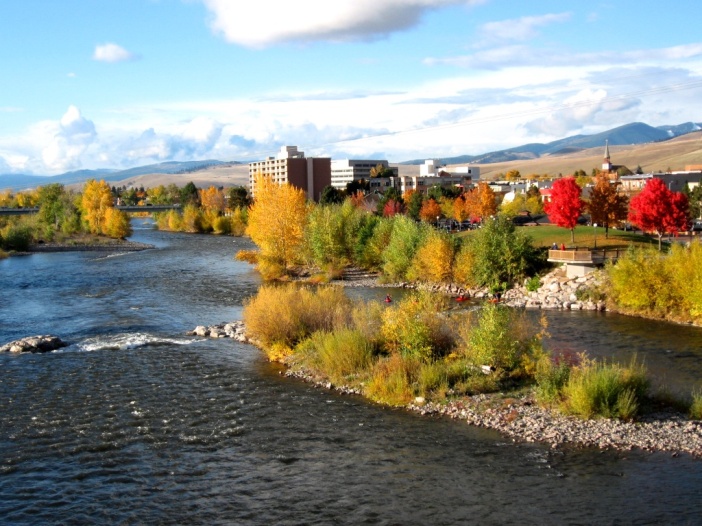 A changing climate could deeply impact Missoula County in a multitude of ways and it’s time to plan ahead. That’s the consensus of over 90 local experts and community members who gathered to identify risks and devise adaptation strategies. Missoula County Supervisor Michele Landquist attended and later acknowledged, The science behind climate change is very real and we are beginning to incorporate that element into our decision making. The Geos Institute and Headwaters Economics worked with the Clark Fork Coalition, the local convening organization, to bring the ClimateWise process to Missoula County. (photo: Clark Fork Coalition) 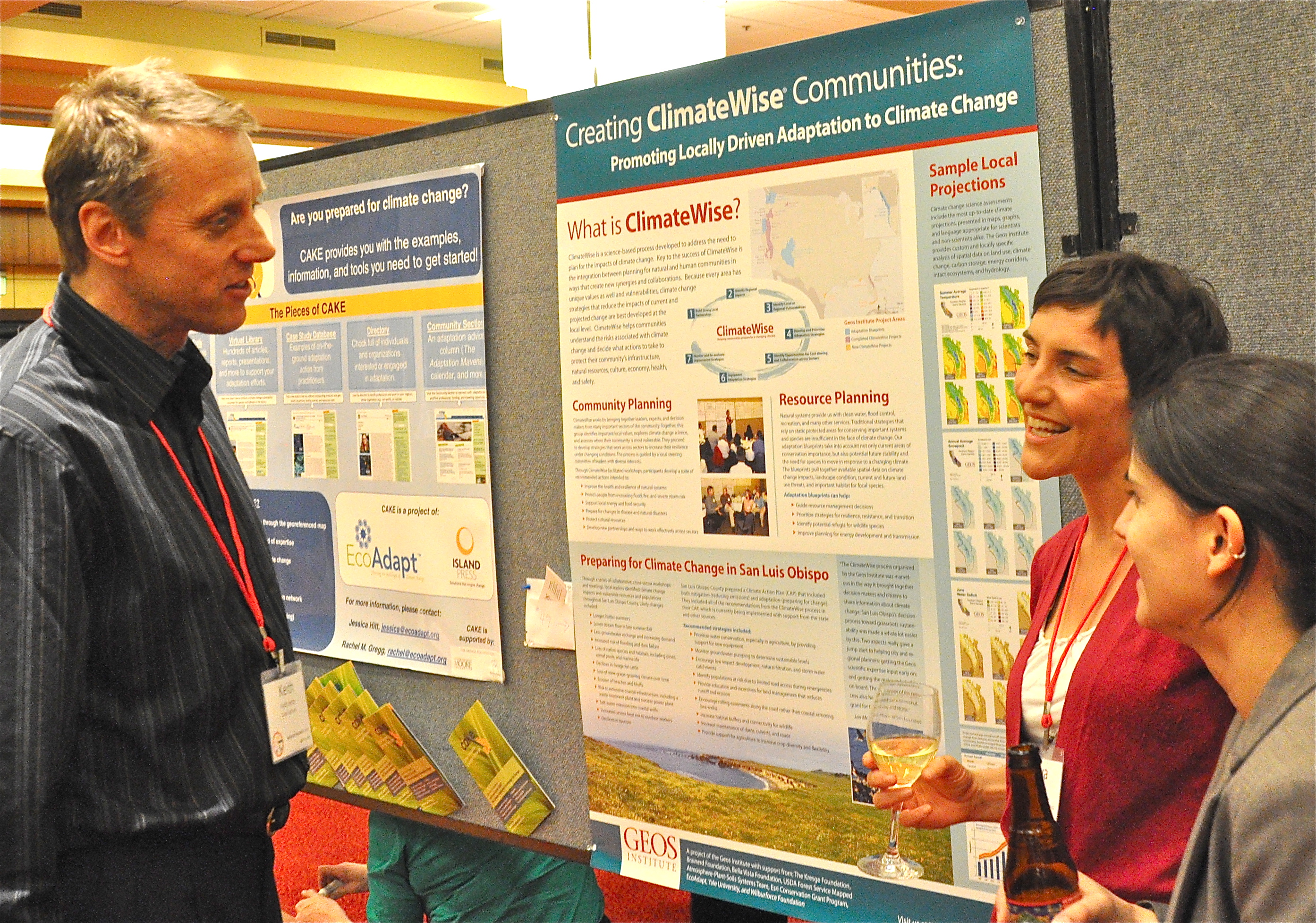 More than 500 people attended the National Adaptation Forum in Denver, and I wish I could have talked to them all. I did get to chat with dozens of fascinating, super-smart people and mention a few here. Those brief conversations plus excellent workshops sparked my imagination for dream jobs and potential partnerships. The Geos Institute participated as a sponsor, presenter, and exhibitor (see our poster Creating ClimateWise Communities).

Guest Opinion by Marni Koopman in the Ashland Daily Tidings

I recently attended the first nationwide meeting on climate change adaptation, called the National Adaptation Forum, in Denver, Colo. This was a meeting of people from diverse backgrounds, all working on the same global issue — how to plan for and respond to the accelerating and inevitable impacts of climate change. There were sessions on biodiversity, water resources, tribal lands, coastal areas, social equity issues, infrastructure, coastal property rights and many other topics.

Thank you for supporting Oregon Climate Action Day in Salem on Wednesday, May 22, 2013.

Oregon Climate Action Day was entirely volunteer-created, and every donation made it possible for a greater number and diversity of people to participate.

This event has now spawned a state-wide citizens network that welcomes participants to engage in the following mission:

We welcome your continued involvement.  Let's stay in touch!

Six scientific societies are asking the White House to hold a national summit on climate change.

In a letter delivered to President Barack Obama on Friday, days before his annual State of the Union address, the groups lay out a plan for a summit "to identify policies and actions that can be taken by each Federal agency and by state and local governments to address the causes and effects of climate change.”

“We would like to offer the support and assistance of the thousands of scientists and other professionals who are members of our organizations,” said the groups, including the American Fisheries Society, the American Meteorological Society, the Ecological Society of America, the Society for Conservation Biology, the Society for Ecological Restoration and the Wildlife Society. “We respectfully request that you convene a national summit on this urgent and important challenge.”

The Need for Climate Change Adaptation

Climate change is well underway. Global temperatures have increased 1.5° F. Sea level has risen 8 inches. Forest and rangeland res have increased. Fish, wildlife, and plants are on the move. Climate change is expected to progress more quickly throughout the next century. Many changes will occur regardless of how well we curtail future greenhouse gas emissions, so we need to prepare for those impacts in order to protect people, our water and lands, and wildlife. Preparing for and responding to a changing climate is called climate change "adaptation." Unfortunately, we can no longer simply use past conditions to plan for the future.

At the Geos Institute, we developed a process that walks a community, watershed, county, federal planning unit, or region through a process that helps them begin to plan for climate change. An important component of the process is that it works across both socioeconomic and natural systems. The ClimateWise process begins by compiling information about local impacts of climate change, based on output from climate models and studies of ecological effects.

Wetlands Protection as an Adaptation Step

The Geos Institute is assisting communities in their climate adaptation planning by providing climate projections, workshop facilitation, and reports. Here's an update from the Central Oregon ClimateWise process:

Deschutes county in Central Oregon has adopted the largest wetland inventory in Oregon; nearly 19,000 acres. Peter Gutowsky, Principal Planner, says the Deschutes county commissioners all approved, with no one testifying in opposition. He adds, "This is a testament to a program that produces multiple ecological benefits, including some needed resiliency in the face of changing climate conditions."

Bruce Riordan sent us his "unofficial takeaways" from the climate change adaptation workshop organized by the Kresge Foundation and the Geos Institute (Portland Oregon 2012). Riordan is the Climate Strategist for the Bay Area Joint Policy Committee. Here's an excerpt. For the longer list, This email address is being protected from spambots. You need JavaScript enabled to view it..

The Geos Institute, based in Ashland, Oregon, has developed tools and methodology to help communities respond and adapt to the pressures of climate change. Yesterday, I attended a presentation at the GIS in the Rockies by Jessica Leonard, geospatial analyst at the institute, and learned more about their approach and their projects. Leonard stated at the start of her talk that, “GIS helps us become visionary rather than reactionary.”

If global warming continues unabated, summer temperatures in the Rogue River Valley could rise up to 15 degrees by 2080, making the weather in the southern Oregon valley similar to Sacramento's, Oregon researchers said in a report released today.

It can be daunting to wrap one's mind around the concept of global climate change. It's easy to see the threats posed by melting glaciers and endangered polar bears, but it's harder to understand what that means to us here in the Rogue Valley, or what we can or should do about it.

Almost every aspect of life in the southern Willamette Valley could feel the effects of climate change, a report released today says.